Results Of A Good Rummage
All said and done, it looks like we’ve come out of this quite well. Out of the nearly forty checks that I did, I’ve only found five areas that require my attention.
Rocker cover Gasket *
This I spotted on the first look at the vehicle but I am now reassured that it is just the gasket and that will be a priority job, it will cost me less than a quid and take about 20 minutes if it doesn’t rain. 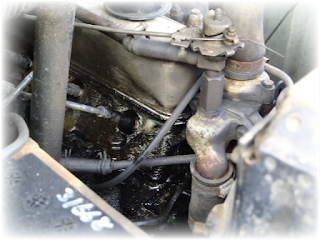 Exhaust and brackets*
My hopes that this might last a month or so was somewhat dashed, when the rear hanging bracket gave way due to rust it caused the exhaust to drop and twist, placing a lovely little split in the nicely thinning crust infested pipe. Twas a job to be done so onwards and upwards repaired the hanger and hole temporarily; new brackets have arrived and new exhaust system is on the way.
As I gaze into my trusty Swarfega tub and the crystals clear (those bits that get in yer bloody cuts), I see a future of Rusty bolts, choice words, profanity and lumps out my knuckles, so enough of that, put the lid back on.
Footwells *
The driver’s side has a nice hole that has been patched, it’s not terrible but I have decided to do both sides and renew them with new panels, they’re not expensive at £13 each and worth doing methinks, still, no rush so that’s a job for later. 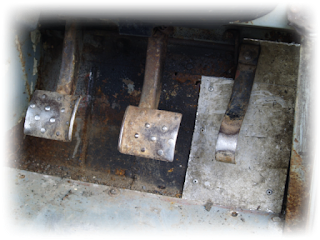 Inner wings (Mud shields)*These are connected above and below the fore mentioned footwells and indeed shelter said footwells from all the mud and water from the wheels, so no surprises when I tell you they are rather in need of replacement. Hopefully, I’ll get to do these at the same time as the footwells.
Steering box cover *
This is attached to the aforementioned Mud shield on the driver’s side and again has somewhat depreciated, again that’s another one to do with the footwells; the good news is that is the only panel issue in the vehicle so I’m rather chuffed. 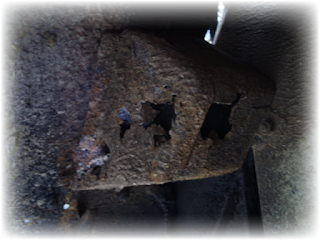 Seats *
There serviceable to be honest and I don’t see us worrying too much about it. I may replace them at some point, its only cosmetic really. What I would like to do is add two bench seats to the rear, they will come in handy and might add a bit to the old girl’s likeability at £32 each they are a luxury extra but it’s not exactly going to break the bank will see how we go.
Chassis*
The chassis is looking good and strong, the reason why I list it here is that there’s some work I intend to do. No damage to repair but very important work none the less, prevention is better than cure: I’m going to clean the whole area front to back at some point; I’m considering using some special paint called Bullet, then additional under-seal and finally Oilsyle the inside of the chassis; a job for the future but I want to tackle it sooner rather than later. Last famous words.
You see men get stuff done: I tell Er Indoors all the time, there is absolutely no reason to constantly remind me about the decorating every six months, it will get done you just need to be patient. 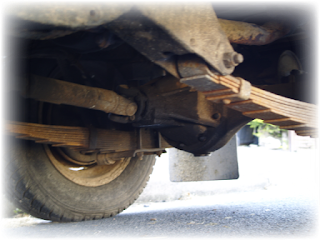 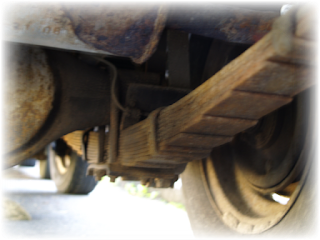 The leaf springs are in good order, they are a little rusty and stiff but I’m sure I can recover them with a bit of lubrication and use. I’ll go over them with a wire brush both sides and clean the majority of the surface rust off, then I’ll give them a liberal coat of penetrating oil, that will work its way in between the leaves. Once that’s done Ill mix some oil with a little diesel and give them a liberal coating, again the diesel will thin the oil and seep in between the leaves. A few miles around the field and down the rutty drove and they should start to glide a little more.
If they were totalled obviously they would be replaced, any worse then the ones I have here and I would have removed them, stripped them down, cleaned each leaf and then put a smear of grease between each leaf as they were reassembled. I’m happy that I can resurrect these with a bit of lube and some use.