What The New Year Brings
Well if I’m honest this issue became an issue just before Christmas but due to the impending holidays, I decided to leave this till the madness had subsided.
We went to go out in the Landy, but she spluttered and died after a long drawn out whimper. I saw the problem was fuel starvation and managed to get home by priming the pump as we went. Due to the inclement weather i.e. gales and rain almost every day, I decided to get the girl in the garage, to do so I have had to remove the roof, which as it turned out was a bit of a family affair, all hands to the pumps so to speak: Another job has now inheritably begun, I was going to remove the roof and see if I could reattach it via some form of clips and locating pins? This hopefully would mean we could take it off easily in the summer, so all good and of course it now fits in the garage.
Limited space but dry 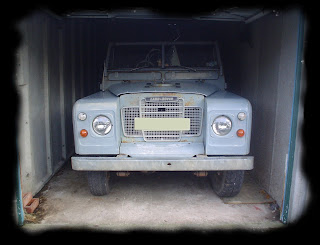 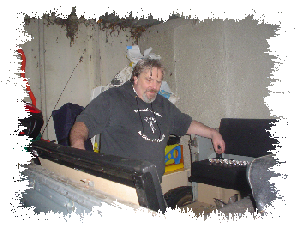 Fuel Issue and fettling
So starting at the beginning, obviously there’s probably some muck in the bottom of the old tank, on inspection its pretty good and there are no leaks so Ill concentrate on stopping any possible muck from getting any further up the system and clean as we go.
Lift pump: I was going to remove strip and clean, but as usual and very satisfyingly parts are cheap and a new lift pump and globe is £13.00 so remove and replace is the order of the day, I’ll keep the old one clean it and keep it as a spare, I’m pleased to say I found the change over of pumps very easy.
1/ Removed the air filter for a bit more access.
2/ Disconnected the battery, spark and petrol don’t really mix, well not outside the chamber anyway.
3/ Disconnect the fuel lines, one in, one out, no fuel spill to speak of.
4/ Undo two nuts holding the pump to engine 13mm ish. Remove the pump, clean off old gasket.
Replace in a reverse manner, using a new gasket, simples: Prime the pump with the lower lever and check for leaks. Jobs a gooden.
I have an inline filter between the lift pump and the carb, so I’ve replaced that one. Well, I still have an ie issue even though I have clean fuel getting to the carb, so I’m going to presume that the mucky fuels made it to the carb and blocked the jets. ill remove the carb, strip and clean, this will be fun, my past results at carbs have been, well poor. I’m very good at taking them apart :-).
My 2 and a 1/4 petrol has a Zenith carb fitted, you can also have Solex or someone may have fitted a Webber. I’ve opted for a repair kit at £9.00 for mine, includes everything, new jets, screws seals and gaskets: I could have just stripped and cleaned, but whilst I’m in there why not fit it out with new inner’s It’s better than refitting and finding something else is wrong, I could also have replaced the carb with a Webber, but I want to limit the expense at the moment and if I’m honest I’m uncertain of the benefits of replacing with a Webber.